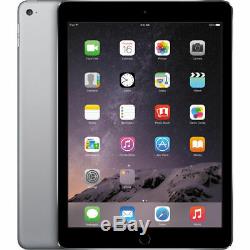 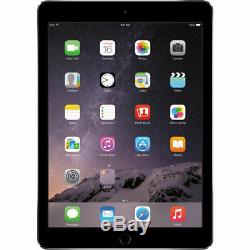 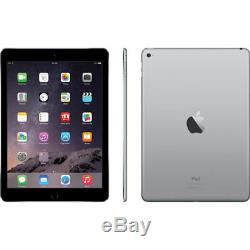 What's in the box? Work and play faster, thinner, and lighter with the space gray 128GB iPad Air 2 from Apple. Featuring Apple's 64-bit A8X chip and M8 coprocessor, the Air 2 delivers 40% faster CPU performance and 2.5 times the graphics performance when compared to its predecessor.

It's also 18% thinner at 0.24 and weighs 0.96 lb. The LED-backlit 9.7 2048 x 1536 Retina display's anti-reflective coating reduces glare by 56% and uses a single-layer design to eliminate internal reflectance for richer colors, greater contrast, and sharper images. This iPad features 802.11a/b/g/n/ac Wi-Fi technology with MIMO support for download speeds up to 866 Mbps as well as Bluetooth 4.0. Share documents and files with AirDrop and stream your iPad's content to your compatible HDTV and speakers with AirPlay.

The 1.2MP front and 8MP rear camera let you take high-resolution photos and videos as well as videochat in HD while dual microphones reduce background noise. The iPad Air 2 runs iOS 8, featuring Siri, iCloud, and Spotlight Search. The iPad Air 2 is 18% thinner than its predecessor at 0.24 and weighs just 0.96 lb. While lightweight, the Air 2 is still durable, thanks to its aluminum unibody construction.

Within the 9.7 LED-backlit touchscreen, the 2048 x 1536 native resolution renders text and images at 264 pixels per inch and a total of over 3.1 million pixels. The display uses a 1-layer design, which eliminates gaps between layers, along with the internal reflections caused by those gaps. This results in richer colors, greater contrast, and sharper, more vivid images. The display also features a fingerprint-resistant oleophobic coating to keep your screen clean. The iPad Air 2 ships with the Apple A8X chip, which is 40% faster than the A7 chip in the previous iPad Air.

It also has 2.5x the graphics performance of the A7 chip. The A8X is built upon second-generation 64-bit desktop-class architecture, giving it high performance while retaining a 10-hour battery life. The iPad Air 2 was designed to be on the move.

That's why the M8 coprocessor measures motion from your iPad by pulling data from the accelerometer, gyroscope, compass, and barometer. This allows your apps to give you a better experience based on the movement of your iPad Air 2.

It's a task that would normally fall to the A8X. But by using the more efficient M8 chip, you save on power use and the A8X chip is able to focus on other tasks. The iPad Air 2 may be faster and more powerful, but it's not more power hungry. Even though it's 18% percent thinner and 40% faster than the previous-generation iPad Air, it still gives you the same 10-hour battery life, thanks to the A8X chip's energy-efficient design.

Your fingerprint is the perfect password. You always have it with you.

And no one can ever guess what it is. Apple's Touch ID technology uses a unique fingerprint identity sensor to make unlocking your iPad easy and secure. Just put your finger on the Home button to unlock your iPad. Touch ID is capable of 360 degree readability, so no matter how you're holding it - portrait, landscape, or anything in between - your iPad knows who you are.

With more than twice the Wi-Fi performance, thanks to the 802.11ac antenna and MIMO (multiple-input multiple-output) technology, the iPad Air 2 can reach download speeds of up to 866 Mbps. With dual-band (2.4 GHz and 5 GHz) 802.11a/b/g/n/ac Wi-Fi and MIMO, that's more than double the data rate of the previous-generation iPad Air. So now when you want to download a movie, share photos or documents with AirDrop, or just browse the web, your connection is faster than ever.

With FaceTime video calls on iPad Air 2, your conversations look better than before. Make a video call over Wi-Fi and see (or show) every expression on the display. The FaceTime HD camera features a backside illuminated sensor, which brightens up your FaceTime chats, selfies, and group Photo Booth shots, even in low-light situations. The camera records 720p HD video and 1.2MP photos, and features an f/2.2 aperture, auto HDR, face detection, burst mode, exposure control, and timer mode. The 8-megapixel iSight camera on the Air 2 was designed to help you capture all of life's moments at a moment's notice.

Use the Retina display as an easy viewfinder to frame the perfect shot. Quickly swipe between capturing stills or 1080p Full HD video at 30 fps. Every time you shoot, the image processor in the A8X chip works with the camera to make the adjustments necessary to make your picture as great as it can be.

Continuity lets you start a project on one device and finish it on another. Family Sharing lets up to six people in your family share movies, books, music, and apps. With iCloud Drive, you can safely store any kind of document and access it from any device. The revamped Spotlight search function now gives you suggestions from Wikipedia entries, places nearby, trending news, and more, and is smart enough to recognize context and location to offer you the most relevant information.

IOS 8 is designed to work seamlessly with the iPad Air 2, taking full advantage of its A8X chip, 802.11ac wireless capability, and Retina display. ICloud automatically makes sure you always have the latest versions of your most important things, like documents, apps, notes, and contacts, on whatever device you are using, even a PC. It lets you easily share photos, calendars, locations, and more with friends and family.

And with Find My iPhone, it helps you find your device if you lose it. Your iCloud account comes with 5GB of storage, free.

Siri lets you use your voice to send messages, schedule meetings, check the latest scores, and more. Ask Siri to complete tasks just by holding down the Home button and talking. Siri understands what you say, knows what you mean and even responds to you. AirPlay functions off of the wireless capabilities of the iPad Air 2 and allows you to seamlessly watch or listen to your content on your HDTV.

When connected to the same wireless network, content can be controlled from the iPad and ported through or watched on auxiliary devices. Frequency response: 20 Hz to 20,000 Hz.

With any questions - we're here to help! We'll notify you if so; please ensure an adult is present to receive and sign.

We unfortunately cannot accept payments from accounts located outside of the US and Canada. Sometimes you just need to return an item.

deals" and is located in Avenel, New Jersey. This item can be shipped to United States.